The below command encrypts it and stores the backup in /tmp directory.

Note the UCP version. My UCP version is 3.0.5 and input your <ucp-instance-id>

To find the ucp instance id, run the command “docker info” and get the ClusterID as seen in the second below picture

Below is the output the command

Below image shows the cluster id 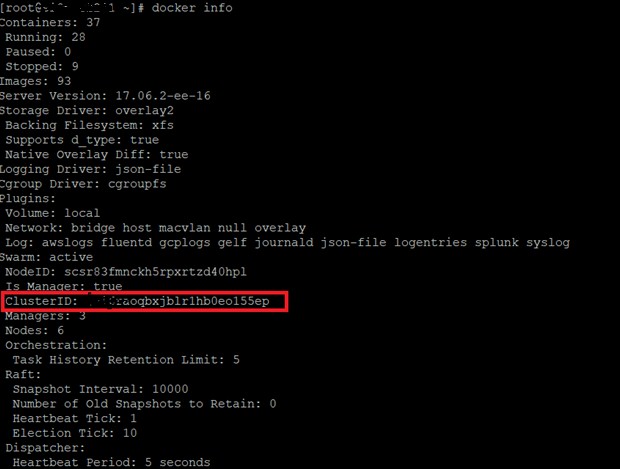 You only need to take the backup on a single UCP manager node.

Since UCP stores the same data on all manager nodes, you can take periodic backups of a single manager node only.

For Docker EE 17.06 or higher, if the Docker engine has SELinux enabled you need to include --security-opt label=disable in the docker command

To find out whether SELinux is enabled in the engine, view the host’s /etc/docker/daemon.json file and search for the name "selinux-enabled":"true"

Restore from the backup of UCP

The backup location in my case is /tmp

Note: While doing restore, if the swarm version is different from the version where you took backup, new certificates will be created in ucp access. So the existing client bundle will not work. New client bundle has to be created for taking backup. Ucp only restores the Admin settings and configuration.

Note: since you need to stop the docker engine of a manager node, you need 2 or more nodes to make sure the cluster is healthy. Select only the manager node, don’t take backup on the leader node as it will cause new election and will cause downtime.

Stop the Docker Engine on the manager

you will see the below output

Note: Make sure to restore in the same ip address of the node you made backup with. Also make sure to use the same engine version

Remove the contents of the swarm folder /var/lib/docker/swarm

Restore by unzipping the backup contents to the swarm location

Re-initialize the Swarm to create new configuration for the docker swarm.

Now add the manager nodes to the cluster